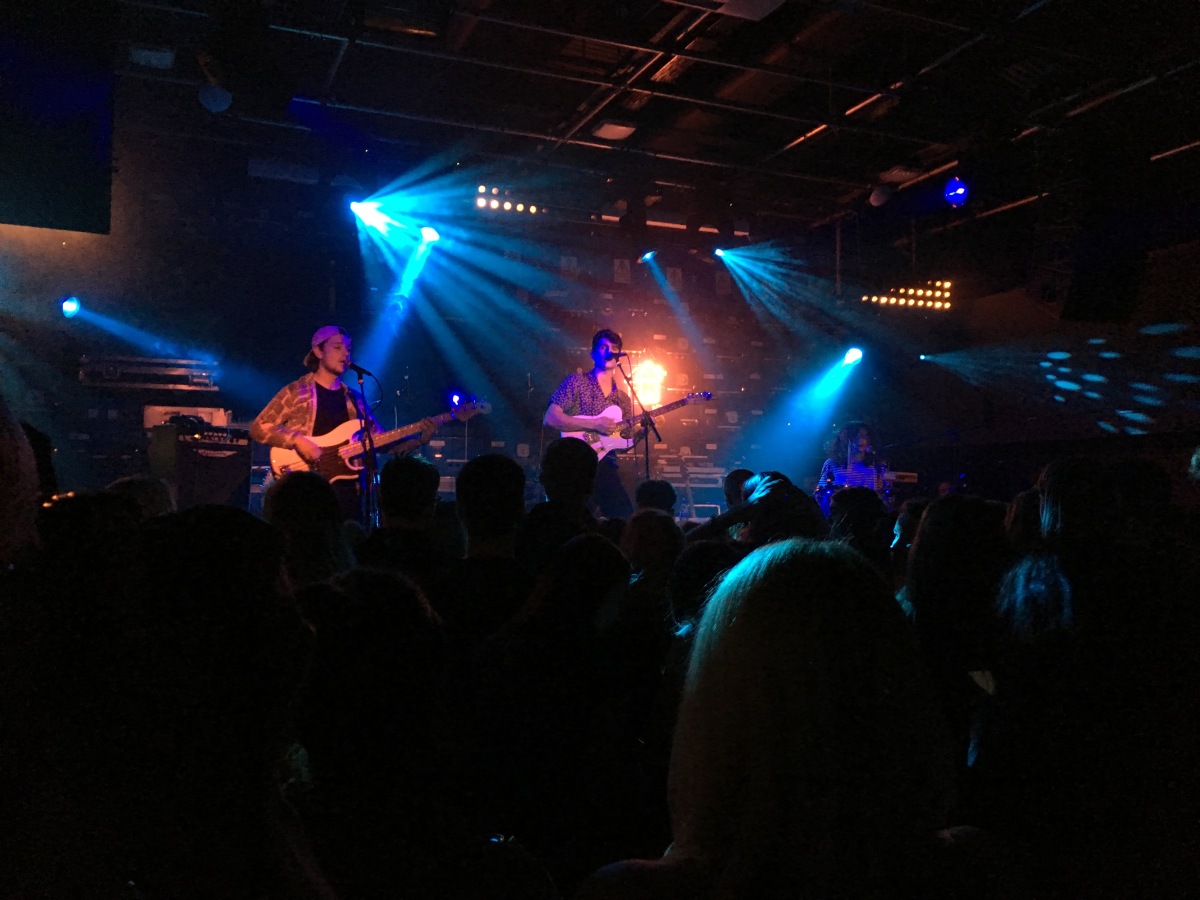 “I love these unconventional interviews. Nobody wants to know about the boring stuff, it’s all on Facebook” laughed Jacob Leff, calypso-pop beat maker and percussionist extraordinaire. Macclesfield based three-piece Cassia, were halfway through their tour when we sat down to have a chat with them, in a sweaty room above the stage of Gorilla in Manchester, last month. Having climbed into bed at around quarter to six that morning, after a late night/early morning game of beer pong with friends, followed by a six hour drive from Brighton to Manchester, it was safe to say that not even a third of the band were feeling (or looking) fresh-faced. “We had a bit to drink last night as well didn’t we? That wasn’t such a good idea” admitted Rob Ellis, vocalist and guitarist, speaking the words of anyone who’s ever been hung over (which is probably everybody).

What’s been the most enjoyable show to play so far on the tour?

Lou: Birmingham was good the other night.

Rob: That was good for the reason that we’d never been there and it was just buzzing. I was really surprised. But pretty much all of them have been good.

Rob: Newcastle’s always the one… they just go crazy! It makes you feel great. Whether there’s a hundred people there or it’s not absolutely packed, they always go mental so it’s nice to see that.

Lou: That [Newcastle] was the best one.

Rob: Great Escape was cool, I really enjoyed that. We had a few fluff ups like his [Leff’s] kick fell over and my string broke – we were only two or three songs in. But it was good. All of them, we’ve sort have been surprised – surprised probably isn’t the right word actually – by sort of how good the reception is, in comparison to last time– Camden! Actually, that’s probably one of my favourites, so far. Camden. Everyone was just having a good time.

Leff: I thought he was going to stage dive at one point!

Their current single ‘Weekender’ was released back in March, with a feel-good music video to accompany it. It followed the hugely popular ‘100 Times Over’ which we reviewed when it was released last year. It seems that ‘Weekender’ is proving to be just as popular though, especially in the bands’ live set. “Whether you know the tune or not, it’s just “did you go out at the weekend?” – you know what you’re saying” explained Rob. “It’s a bit more chilled out though that one I think. It’s a bit different”. “More rocky” adds Leff. “He [Rob] programmed my beat for ‘Weekender’. I was there for like 20 years trying to figure out another cool African part or something. I was like “I’ll show him”. And then we listened to the old demo and I was like “f-u-c-k”. I’ve lost my job. We’ll have a drum machine next!”.

Are these tracks going to come to something? Are you going to put out an EP? Can I even ask that question?

Rob: I don’t know about that!

You’ve got a very summery sound so that makes sense. I can’t imagine you releasing a Christmas song…

Rob: No, not a Christmas song. It’s got to be in summer.

Leff: We’ve actually got a Christmas album in the works.

Album?! Covers or your own?

Lou: What’s the other guy who does Christmas songs?

Rob: If you don’t mind me saying so, our rider is actually really cool.

Leff: It’s very cool. We’ve only had one time where we’ve got it and none of us ate any of it anyway, which is kind of stupid.

Rob: We put peaches on it or something like that and someone said that’s a good idea because then you know who’s read it. They’ll say “you’ve got tinned melon or peaches on there haven’t you?” and we’d be like yes, you’ve read our tech spec!

Rob: Yeah I’d never thought about doing that before. We just genuinely wanted some sort of fruit.

The band, consisting of Rob, Leff and Lou Cotterill on bass and vocals, formed nearly two years ago and began just like any other aspiring musical group – at the bottom. “We put out the first three tracks and we sort of didn’t know what we were doing, because we were a very small band then. We sort of just released them and then did what any band does and tried to get people to listen to them. And then from there we just gigged a lot didn’t we? Like a lot.” The gigging hasn’t stopped yet, with even more shows added to their current run of tour dates and a rapidly increasing following of dedicated fans. “I like gigs” says Rob. “You start learning your craft as well then”.

“It was kind of like a bit of a, not a piss about, but it was definitely a mess about at one time” adds Leff. “We did a few little gigs every now and again”. But the three piece decided to start taking their music more seriously, after an encounter with a fan left them wonderstruck. “Our tent was near the loos and some guy was queuing up and he was like “are you Cassia?” we were like “yeah…”. We were getting really cocky because we just thought shit, people actually like our stuff!”

“From that point on we were like right we need to gig and rehearse properly. We just used to play gigs and have a laugh and after that we were like we need to sit down and make it all perfect” recalls Rob. “It’s like today. I wouldn’t have imagined a year ago that we’d be playing Gorilla.”

So what’s the plan after the tour?

Leff: I think what’s going to happen, which is what happened with the last one, is it kind of just merged into this one. We’ve got tonnes of festival stuff. We’re actually going to Holland!

Oh wow! Will this be the first time that Cassia heads overseas?

Leff: I can’t wait to go to Amsterdam, obviously for the gigging and everything…

Rob: We’re spending two weeks there so you can imagine what states we’re going to be in when we get back.

Because of the constant gigging? That’s what you mean isn’t it?

Rob: This is why I don’t drink, because of days like this. You get to gigs and you feel like utter shit. I hate it man. I’m gonna get up there tonight and be like “I am NOT hung over. I am NOT hungover”. I’ll have to convince myself.

Rob: It’s Lou’s driving! His driving is like [makes car noises] and being in the back, there’s like 5G’s of force coming either side of you. Each time we turn a corner…

Leff: It’s worse in traffic as well because he’s not got his bite point down, so it’s like “uh-uh-uh-uh”, jolting and all that. He’s going to hate us for saying this.

Rob: Saying that though, he’s a good driver when you think about it. He just drives up and down the country and it’s pretty smooth. Touch wood there.

Yeah, you haven’t finished the tour yet…

Again, your tour isn’t over yet…

Leff: We will never break down!

I’ve known bands that have said things like that and then it’s all gone wrong from that point i.e. accidentally leaving the hand brake off and their van rolling down a hill!

Rob: That is horrible!

Leff: I did that outside my house once cause my drive’s on a bit of a slope. I was halfway out of my car and I was like “AGGGHH!!!” scrambling around and it was about this far away from my house. It was so bad.

That night at Gorilla would surely be a show to remember for the band. Cassia’s chaotic crowd soaked up every drop of their set, setting free their inhibitions, forgetting their worries and losing themselves in the music. Whether its intentional or not, that’s what Cassia do to you. Their tropi-pop uptempo riffs and rhythms help you to escape to somewhere sunnier, where there’s no nine ’til five or boring everyday life. In the land of Cassia, all that exists are good vibes, good music and good company.